STEM like a girl: Why all-girl teams stand out at FTC®

One solution that's tossed into the mix for fixing the issue is advocating for all-girls schools, programs, and organizations. There’s little consensus among the research to indicate why a gender-divided approach works. So, in late spring, we did our own informal, brief investigation at the FIRST® Tech Challenge Robotics Championships in Houston, TX.

A quick glance of the rosters at the championship and you’ll see a good number of all-girls teams participating. To name a few: Ponytail Posse, Rock N’ Roll Robots, RoboChicks, Diva Force, Iron Maidens, and more. We chatted with a few about what having an all-girls team means, how it can help, and why it was important to them.

Taking Charge By Getting Technical

One big takeaway is that boys often take over the technical roles in coed teams.

“When I started in FLL, I was on a team with boys and [teammates] Cami and Summer. We got pushed aside,” said Natalie Morris, member of FTC Team 8373 Diva Force, an all-girls team based out of Springdale, Arkansas. “And this was our thought on it: We can do the same thing as the guys, but they weren’t letting us.”

After that initial experience in FIRST LEGO® League, the girls decided to create their own FLL team and then FTC team. Though all the team members attend school together at the Don Tyson School of Innovation, the team is not a school activity so they meet on their own time.

Julie Townsend, a technical mentor for FTC Team 25 Rock N’ Roll Robots that was founded by Girl Scouts in the Greater Los Angeles area, said that girls are more hesitant than boys to step up and usually end up in less technical roles such as communications or marketing.

“Girls will take themselves out of it before they even start and never find out how good they can do,” Julie said.

“Typically, what we have seen is that girls in a mixed environment or a majority male environment have trouble bringing their ideas to the forefront and really pushing for what they believe is right in a technical sense,” added Taylor Halsey, former Rock N’ Roll Robots member, current master’s student at California State Polytechnic University at Pomona, and a team mentor.

According to the mentors, an all-girls team ensures that young women have the chance to step up into more technical and leadership roles, including designing, building, and programming.

“The all-female environment supports girls who maybe don’t have any experience or very little experience,” Taylor said. “It gives them a chance to find their voice a little faster than they would in a coed environment.”

“They get to live a separate robotics life and explore their interest in engineering and technology separate from all the other [social] ramifications that might happen,” Julie added. “One of the reasons that I’ve stayed with this team so long, even as I’m starting my own family and don’t have a lot of free time to give to it, is that I feel that it’s important for girls to have that kind of opportunity. Schools don’t offer the kind of opportunity to get your hands dirty in a lot of ways that this program does, and I want a place where girls can explore the possibility of an engineering future and decide whether or not it’s for them.”

Julie should know what she’s talking about. At 13, she attended an aerospace engineering camp on a whim and discovered that she loved the field. She previously worked at the NASA Jet Propulsion Lab as a a Mars rover planner and now works as a robotics systems engineer. “Those are kids like me. I took that engineering class on a whim and it changed the course of my life.”

Some educators and researchers are reaching the conclusion that programs for girls can help them learn better. In “Changing the Game for Girls in STEM,” a whitepaper by Techbridge, which works to expand academic options for girls in science, technology, and engineering, the authors have some clear ideas:

“The answer is not more of the same, pretending that traditional computer science or entry-level physics courses are gender-neutral. Girl-centric design incorporates key findings from years of research, evaluation, and program iteration about what works for a variety of girls . . . Safe spaces can foster supportive relationships and collaboration.”

Julie also has noticed that girls’ teams do above average in FIRST competitions.

“When you look at the higher levels in the competition, you will see that relative to the number of girls’ teams that participate in the competition, the number of girls’ teams that end up being considered for those high awards is disproportionately high. Girls, once they are fully invested in the program, implicitly understand all the different aspects of FIRST and how they work together to make a whole good program. That shows in how well they are received by judges and how well their robots come together.

“I think the girls’ teams are an example of the power that female students in our community have and the loss we have when they get marginalized into the softer communications jobs.”

Additionally, these teams say their experience is a bit different than many other teams.

“For me, it was a way to get interested in engineering,” said Britney Gallego of Rock N’ Roll Robots. “But also, as an all-girls team, it’s a different experience. We’re more like sisters, so we have closer relationships with one another.”

Diva Force members echoed this sentiment, saying they were like “a small family.”

Mentors Matter: Tips for You

For those considering mentoring such a team, Julie said it shouldn’t present additional technical challenges. Today’s youth – boys or girls – don’t have much exposure to tools.

1. Start with the basics.

“If you’re mentoring teams, you should be prepared and eager to take in kids who don’t have any experience because they are the ones who are going to gain the most from exposure to your program.” 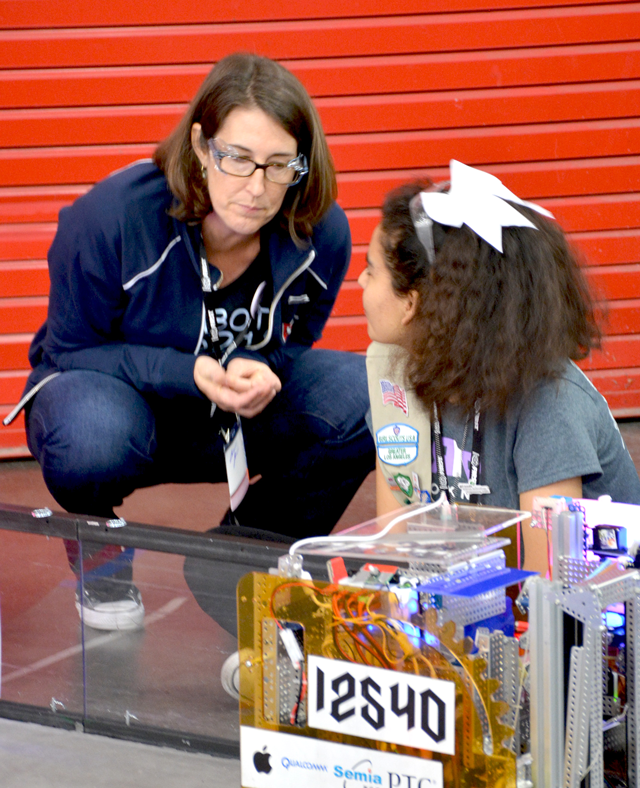 “Some of my biggest success stories among the girls are girls who are like, ‘You know, I never thought about robotics at all until this application came across my desk, and my mom said I should apply for it. And I normally do what my mom says, so I applied. And then it totally changed the course of my life.’”

3. Connect with other mentors.

You won’t be alone – in fact, there’s even some online communities to support girls in FIRST: FIRSTLikeAGirl (also @firstlikeagirl on Twitter) and FIRST Ladies. So take heart and don’t hesitate to build your own team!

Connecting classrooms around the world