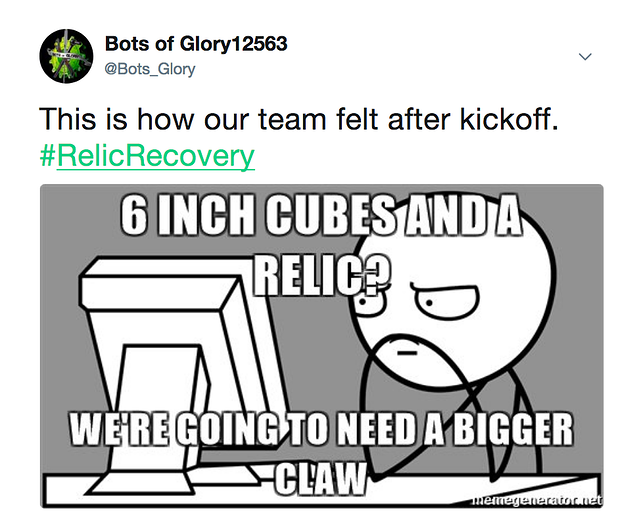 On Saturday, September 9, robotics teams attended kickoff events around the country or glued themselves to the news feeds as the game was announced. They learned the game features creative challenges that bring archeology-style adventures to the competition field:

TETRIX® Robotics designer Paul Uttley is on one of two teams that help create and fine-tune the FIRST Tech Challenge games. Though this competition is less brawny than in years past, he believes there will be many elements to inspire teams.

“I particularly like the challenge to decode a message hidden in the glyph cards,” Paul said. “That is definitely a step up in the application of sensors. I would imagine it’s going to require the ability to access vision on the robot – most likely the camera on the Android phone.”

He also believes that the archeological theme will take teams’ creativity to a higher level, as we’ve started to see already in social media memes. “I think the theme will spawn some great pageantry for the competition events.”

The Word on the Street

After the weekend’s kickoff events and game video introduction, competitors are also psyched for RELIC RECOVERY as indicated by teams’ social media response in the days after the game reveal.

“Love it!! It looks like one of the coolest games yet!” tweeted Team 3595 Schrödinger’s Hat, while some teams like Bots of Glory12563 found some immediate humor:

Some were quick to be more technical in their evaluation.

“Looking forward to this. The pressure will be more equally divided between programmers like myself and the mechanical people,” tweeted Team 11524 Team Name Wanted.

Many teams are already hard at it and posting their prototypes. Even teams in areas hit hard by hurricanes aren’t waiting to start. Team 10497 SwampBots posted a pic of their work at the home of the only teammate with power! We know the enthusiasm for this robotics competition will keep building, and we will all see some amazing engineering next spring at FIRST Worlds!

Get Started with Game Resources

Need to learn more details about the new FIRST RELIC RECOVERY game and how to get a team started in this exciting event? Check out the game reveal video and then find the game manuals, resources, and materials information at the FIRST website. Good luck, teams!

Does your robot’s motor have enough power?